The good folks at MobileZap(AU version of MobileFun.co.uk) sent over a bluetooth keyboard case for my Nexus 7(2012) to review.

Currently this is the only hard cover aluminium - clip on - case for the Nexus 7 on the market (though is availble as a few different brands) thats similar to Logitechs offerings for the iPad.

This is a mini keyboard to match the size of the Nexus 7, its pretty much the same size and quality of the original Asus Eee 701 PC keyboard 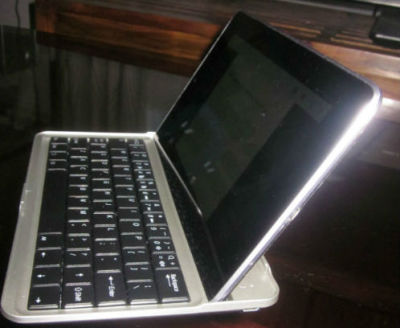 Works perfect with the Nexus 7 (2012 version), all normal keys, media, and Android specific keys ‘just work’. The Nexus 7 fits in perfectly in portrait and landscape mode and the case clips on and looks just like the Nexus 7. 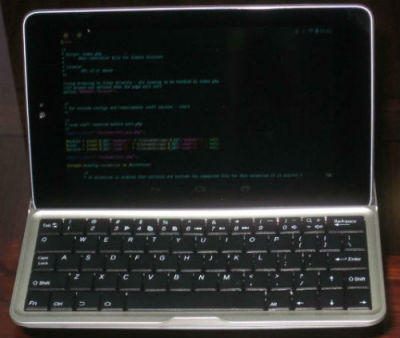 The bluetooth pairing worked without a hitch and only took a few seconds. Battery life so far seems good, its rechargable via the same USB cable as the Nexus 7.

It’s a very minimal design - unlike some of the chunky leather style keyboard cases, making it perfect for when a laptop is too big and a plain tablet to slow for writing.

I logged into a linux server via SSH and fired up Vim to see how it would work for coding and its definitely better for coding than any touch/virtual coding keyboards for Android. It’s not as easy to type on as a full size keyboard but for the size it’s as good as I expect. Only issue with using the keyboard in Vim or SSH is the lack of an Escape key, thankfully you can use Ctrl+[ to do the same as Esc in Vim.

The backing of this case is hard plastic rather than the soft material the nexus 7 uses. This is great for protecting the Nexus 7 when the case is clipped as a cover but when your using it to type on a hard surface it can slid around as you type. Though easily fixed with a small piece of anti-slip rubber glued on the back.

If you need a keyboard for your Nexus 7 for occasional typing - such as taking notes in class or lectures, or writing longer docs and emails this is a great budget keyboard case for the Nexus 7. It’s not going to magically turn your Nexus 7 into a full laptop/desktop replacement but does a great job for when a tablet is more suitable.